Prevention of Migraine Headache via supplments

Prevention of Migraine Headache via supplments

This information is provided to you for use in conjunction with your clinical judgment and the specific needs of the patient.

I have reviewed many topics for ChiroACCESS over the past few years and one of the most consistent findings is the lack of prevention studies for most non-life threatening conditions. Migraine headache is an exception. The scientific literature has many prevention papers, a significant number which include non-pharmaceutical options. This article will discuss herbal and nutritional options that have the strongest scientific evidence for the prevention of migraine.

A very recent review of prophylaxis of migraine was published in the Canadian Medical Journal (1). To say the least, their findings were remarkable. Although this was a medically oriented review, several herbal and nutritional approaches were rated as effective as drug therapy with significantly fewer reported adverse events. Table 1 is a summary of the findings of the review for interventions when the outcome measure used was the odds ratio of a 50% decrease in frequency of migraine. All findings were based on studies that were graded by the authors as A or B evidence based on the United States Preventive Services Task Force criteria.

Pharmaceutical interventions are obviously favored by the medical community even when, at least according to this review, riboflavin and butterbur demonstrate equal or superior effectiveness in A graded studies yet report infrequent adverse effects. 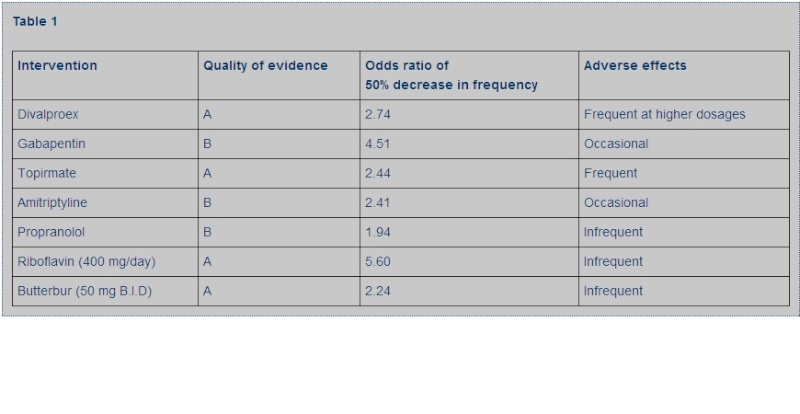 Butterbur: A 2006 systematic review reported on 2 randomized trials (RCT) of butterbur extract (Petasities hybridus) which totaled 293 patients. In these studies a 150 mg dose of butterbur was more effective than a 100 mg dose over a period of 3 to 4 months. Overall butterbur demonstrated a decreased frequency of migraine in over 50% of patients. The brand name of the form of butterbur used in this study was Petadolex (2). In an open label study of 109 children and adolescents the authors found 77% of all patients reported at least a 63% reduction in the frequency of migraine (3). Although no significant adverse effects have been reported in the studies mentioned above, concerns relating to hepatotoxicity have been reported in the literature. A recent study utilizing Petadolex found it to be “free of signals for drug induced liver injury” (3). Several authors have suggested butterbur may be a valuable tool in the prevention of migraine (4-7).

Feverfew: Feverfew is herb that has demonstrated effectiveness in the prevention of migraine in some studies and conflicting results in other studies. Three Cochrane reviews have been published relating to feverfew. The original review could not demonstrate efficacy for feverfew (

but an update published the same year reported “feverfew is likely to be effective in the prevention of migraine (9). The third review returned to the original position stating “there is insufficient evidence” to suggest an effect (10). A separate article suggested the reason for lack of efficacy reported in the most recent Cochrane review was the 400% variation in the active ingredient in the studies evaluated (5). One RCT published after the Cochrane reviews showed migraine attacks decreased from 4.76 attacks per month to 1.9 when using MIG-99 after 3 months. A dosage of 6.25 mg t.i.d. were used (11). All studies reported a favorable safety profile.

Coenzyme Q10: Coenzyme Q10 has demonstrated efficacy in 1 RCT and several open trial design studies. The RCT was a study of 42 patients. The dosage was 100 mg t.i.d. There was a 50% decrease in headache frequency in 42.6% of the patients in the active treatment group compared to 14.4% in the placebo group after 3 months. The number needed to treat was 3 (12). Another case series found similar benefits using 150mg daily (13). None of the studies on coenzyme Q10 reported adverse effects.

Riboflavin: A RCT compared a combination of riboflavin (400 mg), magnesium (300 mg) and feverfew (100 mg) to 25 mg of riboflavin. Both groups achieved statistically significant improvements over baseline. The authors noted both groups exceeded the normal placebo response reported in other migraine prevention studies. This study suggests a small dose of riboflavin may be an effective prophylaxis for migraine (14). Another RCT using 400 mg daily reported statistically significant improvements in headache frequency and headache days after 3 months. The number needed to treat in this study was 2.3 (15). Unfortunately 2 studies of riboflavin in children did not demonstrate improvement (16;17).

Magnesium: A 2008 RCT examined the prophylactic effect of 600 mg of magnesium citrate daily for 3 months compared to a placebo. Statistically significant improvements in frequency and severity were found in the treatment group. Additionally cortical blood flow increased significantly in the treatment group (18). A second RCT also found a statistically significant decrease in migraine frequency after 3 months using 360/mg per day (19). Not all RCTs have shown magnesium to be of effective. A 1996 RCT found no benefit when using magnesium (20). Soft stools and diarrhea were a common mild adverse event occurring in 18.6% (19) to 47.7% (20) in the magnesium groups.

Several other interventions have limited evidence demonstrating effectiveness. They include ginkgolide B (21), lipoic acid ( 600 mg/day) (22) and fish oil or olive oil (23).

It should be noted that time frame of treatment almost all prevention studies is 3 months. Treatment success or failure should not be assessed prior to completion of 3 months of the intervention.

Re: Prevention of Migraine Headache via supplments

Hi t ,sorry l haven,t been intouch ,have a thousand things going on,coming back to the uk,in Jan,and there l,ll take my Mri etc,thankyou for all your help and hope your doing well.Wanted to say about supplements l,ve been taking Cq10,and B2 for 2yrs,now,and l can says l definately have seen an improvement,that and ST,John,s wort,and also taking for Crohn,s and Anklosing Spondylitis,a type of inflammatory drug,and although l get a migraines etc they aren,t like before.l have also put my son on them to,only Cq10,B2,valerian,and he ia better,so there is something there that helps.take care for now love Antoninaxxp.s when l have an attack my husband injects me with Primperan+Voltern mix together,it helps at the end of a migraine and helps you sleep