Earthquakes, and my pain

Migraine Talk :: What's new in the world of migraine

Earthquakes, and my pain

One day after a nasty migraine attack that suddenly took me down, the phone rung and a friend of mine asked me if I had recovered from my headache. I hadn't told anyone about the attack, as often they happen overnight and I just remain in bed, take the meds and hope its not going to get worse.

Some of my attacks can develop from a low level nagging right or left sided pain, into a crunching pain behind the eyes, like someone has got a finger in my head and is pushing the eyeball from behind. When it gets to that point, I wait, sleep as much as I can, take the tablets, and hope to wake up okay. If the pain moves to the centre of the head, oh dear, because by now I am soaked in perspiration, and what happens next is violent and lasting.

Nausea and vomiting, every 45 minutes, I crawl back to my bed, hoping its over, then usually I sleep, and when I awake, a few seconds I am okay, then the tummy reacts, I fight it, and we are off again, and the cycle continues. These last sometimes for 3 or 4 days, I have been vomiting like this for 18 hours........even anti-emetics don't work, like the pain relief doesn't either, nothing does, just time, and when my time is through, the event leaves, like it never was there.......bye bye.....see you next time, nice staying with you xx

This is the worst times, the times that come along suddenly and without any particular trigger, although the last one was shortly after a car accident, so it could have been a reaction to the event, but.........getting back to the start of this topic post, I asked my friend how she knew that I had been hurting, and she told me that there had been an 8.2 magnitude earthquake..........and she had noticed something about them and me, when I started suffering, within a few hours, an earthquake over 6.5 mag occurred!! I tried to argue that it was coincidence, but she insisted, and so I started to record the events and began to notice the patterns myself.

Sometimes on a slow build up migraine, I get this pain that hangs around and gradually it builds until it gets unbearable, and bed beckons. But generally sudden overnighters are the ones that are my predictors, wake up, bang its there, thump, thump, heavy pain, pulse in my ear..........followed by an earthquake. Then it depends on whether there are many aftershocks, if there is I can be in pain for days, if not it goes with the right pain medication.

Of course, without Topomax, I would be in a constant state of pain, every day, one migraine after the other, and I don't have any idea why, but when I was changed to the generic drug Topirimate, back came the migraine, but with Topomax, generally I am free from the bad ones, but still have to deal with the worst of the bad ones.

And here is a picture from the Kilauea Volcano Hawaii, its what my head feels like on the inside, raging red hot and painful, while the outside looks just...... okay. 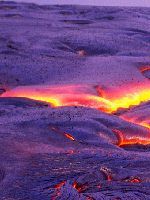 Re: Earthquakes, and my pain

Makes sense to me. Being on the Pacific ring of fire, we get enough earthquakes here for many people to notice the odd way pets, livestock and birds behave shortly before an earthquake. I see no reason why sensitive humans can't pick up on the same signal as other animals. Perhaps we all have the ability, but don't recognise it. Like any sensory input, for a few people it will be a migraine trigger.
_________________
"I didn't mind getting old when I was young. It's the being old now that's getting to me." - John Scalzi Old Man's War, 2005

Migraine Talk :: What's new in the world of migraine