I have been taking topiramate for a while now at 100mgs a day with fairly ho-hum results I guess it has reduced my migraine by a couple a month and has made my rescue medication more effective but I am still getting around 15 migraine days a month and quite a few side effects.

That is exactly how I see it like I have taken a long exposure on a photograph or taken LSD (which I never have). I believe the correct term for this is Palinopsia.

I did contact my GP this morning as it was especially bad and I became worried I had perviously suspected it might be due to the topiramate I am taking but I became anxious about the possibility of it being Glaucoma related which topiramate can sometimes cause. My GP was also a bit concerned about this and called the on call neurologist who was not too concerned at all and although they did advise that I have my eyes check out pronto to rule out raised pressure they said it was more likely to be some new migraine tupe aura or other neurological issue and were dismissive of it being related to the topiramate.

So I am getting my eye checked out this evening and if they are fine which I think they probably are I am to go back and see my GP and get my next neurology appointment moved forward a bit. I am not sure what to make of it. Personally I think it seems most likely the visual trailers are being caused by the topiramate as I have been getting migraines for over 20 years and I have experianced many odd visual disturbances and hallucinations most of which I live with and accept but I am concernd about taking a drug if it is going to leave me with these visual disturbances long term.

Anyone else had this with topiramate or had these tailers with migraine aura?

Oh poppet that is not good.... I have a lot of aura but have never had this... I do know that migraine and aura change over time - my aura has.... but I do think your right to be concerned....

Tee wrote:Oh poppet that is not good.... I have a lot of aura but have never had this... I do know that migraine and aura change over time - my aura has.... but I do think your right to be concerned....

What did the eye doc say?

Thank you for your reply and concern Tee

Everything checked out fine with the eye doctor, my eyes are really healthy with no sign at all of glaucoma or raised pressure which was a big relief! However I am still getting the trailers. I tend to think they could have been triggered by the topiramate but then I am going though I really bad patch with my migraine at the moment so who knows what is going on in there! I did dig out my copy of Oliver Sacks book on migraine and in the chapter on aura he talks about Cinematographic vision which is discribed here:
http://www.migraine-aura.org/content/e27891/e27265/e26585/e48971/e49005/index_en.html

I am going to hopefully see my GP in the next few days, I am due to go back to see the neurologist in July but my GP did say she thought we should try and get me in sooner but I think it all depends on what the neuologist decides is best. In the short term though it seems that my eyes are not at risk and the symptoms appears to be neurological either migraine or medication related.

Can't say I've had visual trailers anywhere near that shown in the picture, but on occasions I do find that movement becomes blurred. The faster the movement, the stronger the blur. A bit like if a camera stop setting is too slow.
_________________
"I didn't mind getting old when I was young. It's the being old now that's getting to me." - John Scalzi Old Man's War, 2005

Oh that is good(ish) news.... did does sound neurological....visual stuff is such a pain,I had visual snow for 3 yrs -drove me nuts.....

Spoke to my GP today and the plan is to keep on with the use of Topiramate but to keep a more detailed diary of my other symptoms as well as migraine itself such as the visual trailers and other perceptual disturbances I have been having (which are worse now but unlike the trailers I always had them they are just more prevelent with topiramate use i.e. sleep paralysis and hypnagogic hallucinations etc). Something that I have been reading about is Alice in Wonderland Syndrone which sounds like that might be what is happening to me. It is related to migraine and in fact is probably just the extreme end of migraine aura but I think I will need to wait will I see the neurologist again to get any definative answer.

As long as it isn't dangerous or too debilitating then I can live with a bit of weirdness!

Thats good news in a way............. some of the side effects of Topamax do settle only to crop up again as the dose goes up - but the diary plan sounds a sensible one.

I have had some odd bodily sensations of late the main one being that most nights I wake up or I wake up from sleeping off a migraine to having this feeling like my whole body is becoming atomised as if all the tiny particles that make it up were vibrating fast and sort of drifting apart and that if you could see me at that time I'd just look like a fuzzy blob!

The first couple of times it happened I was actually quite scared and later wondered if it was a seizure of some kind but my brother has epilepsy and as far as I am aware it's not usual to be "aware" of what is happening during a seizure. I then put it down to some kind of sleep paralysis although it is quite different to my usual SP experiance.

I have also had the odd sense that my hands have felt abnormally large or elongated in relation to the rest of my body and one time to a tea cup just to keep with the Alice theme!

I must say in all these cases I realise very quickly I am experiancing some kind of illusion and I am not distressed by it. I think people find this hard to understand if they haven't experianced such things themseslves. I was Was telling my brother about it earlier and saying how all my life I've lived with odd perceptions and I imagined everyone probably did but it's only now I am realising that these experiances are not so common and probably related to migraine activity in the brain.

I am still surprised that other people automatically think that weird migraine experiences should be distressing. Although I think sometimes the lack of distress is caused by "brain fog" during an attack, I think that you are right in saying that for many of us, we have not known anything different. In my own case the degree of weirdness has increased over the decades, but it has been so gradual that it almost seems "normal".
_________________
"I didn't mind getting old when I was young. It's the being old now that's getting to me." - John Scalzi Old Man's War, 2005

I have trailers just like what you are experiencing piwakawaka. I am on tons of Topamax. The trailers are most noticeable when I first wake. I do see them during the day sometimes. I have been seeing them for several years. I went through going to the eye doctor (both an ophthalmologist and a neuro ophthalmologist) , the neurologist, and the GP - they found no problems.

I too have had increased weirdness over the years. Sometimes I have "mosaic vision". I see black spots on the ceiling every morning when I wake up. The list goes on and on.

I hope this makes you feel less distressed. I am sorry I did not see your post earlier. 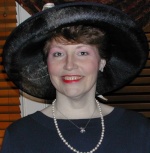 I was on to Topamax for 8 months and the visual trailers were worse for me when I was at 200mg a day, I'm off it now a couple of weeks and now in day 13/14 of a biggie hm

The visual trailers are not as bad overall now but when I wake up I do see kalidascope like movement in black in White, don't know if anyone can relate to that, my balnce seems to be permantaly off as well

I'm like a shopping trolley with wonky wheels, I want to go in a straight line but veer off in all directions