I was hoping someone here could share their experience or knowledge - I started on Imigran 3 years a go with an 80% success rate of whether 2 hours later I could resume some normality (obviously not being cured - but not being in living hell either) - then a helpful pharmacist questioned why my GP didn't prescribe me the radis fast acting ones and since then I had those on repeat prescription (although the pharmacist did say GP's were reluctant due to the cost). With Imigran Radis I have been able to rely on a 100% vast relief in around 2 hours, to the point where I can scrape myself into the shower and get to work (having nearly lost my job due to sickness absence this has become a main priority - extremely closely followed by time with my daughter who will be 3 in July

About 3 weeks ago I got a letter from my GP to say that as a cost cutting exercise everyone was being switched over to non-branded equivalents - but as there shouldn't be a difference in the efficiency there was nothing to worry about.

Either I am REALLY unlucky/my circumstances have changed or this isn't strictly true.
Last two big migraines causing me to turn to sumatriptan relief (I don't take these unless I can feel it will be a big one which used to have me in bed completely incapacitated for at least 36 hours) I have not felt the weird blood rush and chest tightening and 4 hours later I was still not well enough to even raise my head from the pillow

and I still can't get any food in me. The depressed feelings are also worrying me - it feels like a medical hangover. 'Luckily' for me these have both happened as I had time booked off work (which was meant as family times

) but now I am starting to feel like my security blanket is being pulled from underneath me. No other medication even touches the sides so I tend to not really bother with pain relief.

I hope I made sense - I am not sure I have - migraine heads and coherence don't always play well together!!

Could it be the unbranded tablets simply dont work as well - or have some nasties in them that make me feel sick afterwards (without even having the benefit?) 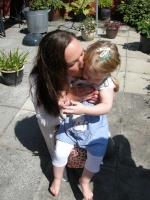 Hmm... the way I see it, which may be wrong, is that the unbranded medication hasn't worked so well for you. Therefore the pain has put your stomach into stasis (this happens to me a lot), causing sickness.

I always take my triptans with Motilium 10 now, which is an over the counter drug that gets the stomach moving, so the triptan is absorbed properly, and nausea disappears.

I have never thought to try that - thanks for the tip! Will get some and have ready for next time x

Personally, I also agree with Sarah, that the unbranded medication hasn't worked for you. It will be worth trying it again with the Motilium but if the results are still not as good as your previous medication I would go back to your GP and explain that you have tried and are not getting the same results. They shouldn't put cost before your health and quality of life, especially if it is going to put your job at risk. For the majority it is probably fine but we are not all the same.

I had a similar experience for something which escapes me know (it will come) But I went from a brand to unbranded and it did not work - I went back to my GP explained the symptoms and they put me back on the branded.