Migraine Talk :: How can we make improvements to the forum

Do you have any control over the ads displayed on these forums? The reason I ask is than too many of them are animated - often painfully so. For example at the moment the had consists of a Windows-like frame with text inside. The text is stationary, but the fame is moving up and down and sideways about 3 times a second. It is extremely uncomfortable.

Earlier there was an ad that was flashing at a very fast rate, such that it was too painful to watch the screen. Often it's possible to scroll the screen so the ad disappears from view, but there are times when it isn't possible.

To be honest, I'm not sure. It's not my forum, but I'm assuming it is a free one, and that's why there are adverts (which we wouldn't have any control over).

But, strangely, I don't seem to get any ads on my screen.

I really don't know why that would be, as I don't have any 'ad blocker' type software installed or anything.

At what point are you seeing the ads? I've just tried logging in with three different browsers, and I only get the ads at the stage where I haven't yet logged in.

As you can see I am logged in, but there is an add beneath the main menu 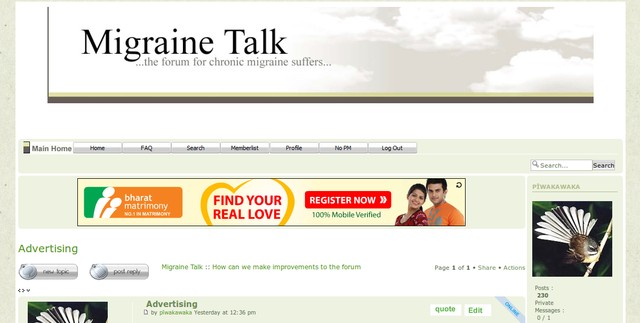 I'm not familiar with Forumotion.com,. but some free hosts do have options on the types of ads that can be displayed. For example text-only ads or non-animated ads.
_________________
"I didn't mind getting old when I was young. It's the being old now that's getting to me." - John Scalzi Old Man's War, 2005

Thanks for the screen shot. I'll look into it and come back to you.

I've checked the settings, and there is only an option for a reduced level of advertisements, which is what we're already running.

Sorry I didn't reply earlier. Thanks for your efforts. I don't like blocking ads on non-profit sites where advertising helps fund the Web hosting. I hope you don't mind too much if I block just those ads where the animation is unpleasant.
_________________
"I didn't mind getting old when I was young. It's the being old now that's getting to me." - John Scalzi Old Man's War, 2005

I did not think you saw the ads once you log in - I dont - how odd.

Nice to see you around. I've missed you

I haven't been around much recently. I wish I could say it's because the migraines have gone, but alas that's not the case. Those, and a few other issues have kept me away from my computer for some time.

Those pesky ads are are odd. Sometimes they appear when I'm logged in and sometimes they don't. Doesn't seem to be rhyme or reason for it. At least, if you're not earning anything from it I won't feel guilty blocking them.
_________________
"I didn't mind getting old when I was young. It's the being old now that's getting to me." - John Scalzi Old Man's War, 2005

Migraine Talk :: How can we make improvements to the forum